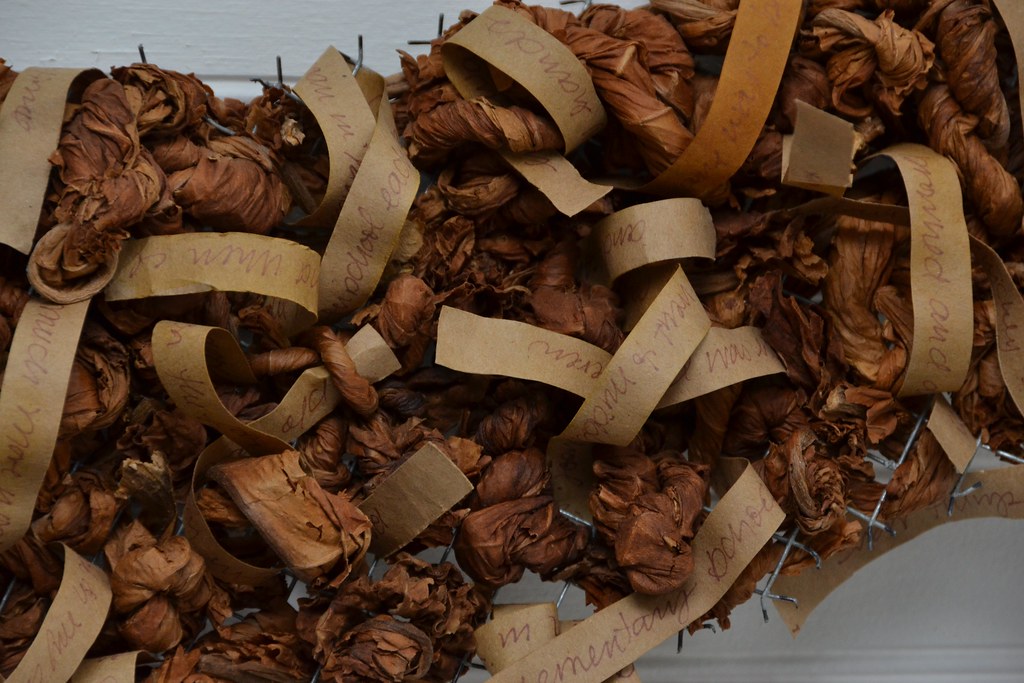 Description: This project recreates a latch hook rug, like the rugs I made with my grandmother when I stayed with her in the summers and after school. I wove together twists of tobacco and strips of craft paper. On the craft paper, I wrote three recollections from my childhood.

My grandparents were farmers in North Carolina. They raised tobacco as part of their crops. I vividly remember working in the tobacco as a child, and my grandmother also smoked, both of which affected my childhood allergies. The smoke would seep into the shag rug in their house.

The first story describes when I cut my right hand with a Dr. Pepper bottle on the steps of my grandmother’s house when I was kindergarten. The shape of the final piece is taken from the shape of my scar. The second story is about spending time on my grandmother’s brown shag rug and my severe allergies. The third story shares the time when my grandparents thought they saw a snake on the shag rug.

I also created audio recordings of the essays, which would ideally play on a loop as part of an installation. Listen to audio files of three interwoven essays here.

In Process: I created this piece as part of a class on Sculptural Books at the Corcoran School of Art and Design in the Fall of 2008. I was pregnant with my first child, which explains some of my comments in the following blog posts regarding fatigue, nausea and brain drain. I was a little reluctant to directly handle the tobacco while being pregnant, but quit wearing gloves almost immediately.

What is this tool?
A look at how I wove the paper and the stories into the hardware cloth
Discusses how the process coincidentally emphasizes the meaning behind the shape