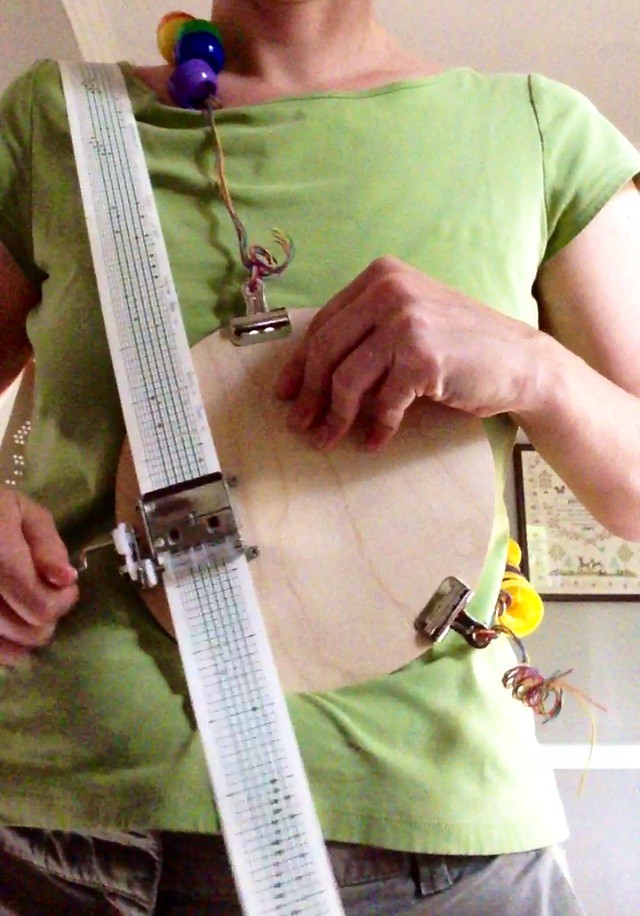 I completed Stockholm last Tuesday (9/30) while Henry’s parents were visiting for a week. (This is the post that caused my web site to crash.) I was excited to finish Oxford and Stockholm at basically the same time. That left me with a week to ponder Paris before my self-imposed deadline, which ends tonight.

So Stockholm was probably my greatest test of faith and I must say it is the most surprising. I wanted to create something inspired by Jean Tinguely and I believe that he would approve of this Automatica musical instrument.

I knew that this piece was about collaboration, but I thought I would end up faking the collaboration. I am pleased to say that is not the case.

First I traded in the hardware cloth for this round piece of natural wood. It is less likely to scratch the player, tear the music and looks more Swedish. I had asked someone to cut it for me while I was at Penland to create a rolling base. So I collaborated on the cutting, even though it occurred in 2008.

Next Eric, my neighbor, mounted the music box to the wood for me.

Finally, I had Lucy restring the plastic bottle caps we collected, as inspired by Bryant Holsenbeck. Lucy has talked a lot about patterns in the last few weeks. I was certain she would make a pattern. That was not the case. So I let her create a series of varying patterns. I think that’s a nice way of saying No patterns. Once she decided she was finished, I made my own simple rainbow pattern. So the strap is half her’s and half mine.

The music on the endless loop is ABBA’s “I Have a Dream,” which features school children singing. No one likes this song. Not even the author of the 33 1/2 Series who wrote about ABBA Gold. It only made it to number one in three countries. And especially not Henry. But Lucy and I both enjoy it and it sounds sweet on the little keytar.

The song was also appropriate because I had a crazy dream on my trip to Paris that matches the lyrics. Then while working on this project, I had another dream involving a long green piece of paper that I tried to weave into Grandfather’s Chair. Later it reminded me a lot of this piece and nudged me along at a point when I had no idea what to do with this project.

I think my favorite part of this is that the piece’s evolution. I don’t know how it ended up being a keytar. But a few days later I recalled that Lucy always called guitars “keytars.” I confirmed with Henry. Perfect.

I plan to include a video of me playing the keytar and photos showing how to punch your own music.