Questioning Faith On the Continuum of Apathy and Action

I found this typed up on my laptop from May 2015, which feels appropriate to share now that everyone is taking action and growing increasingly frustrated with life. I really planned to publicly share gratitude. But this is about faith. And when you actually find yourself caught in limbo, like I was below, practicing gratitude is a very real action to take in the process of participating in systemic change. In fact, it may be the very action that a lot of us are forgetting right now.

On my #todolist for today, this week, October, always? Not sure how this will play out yet. But I know I have to do it. When you practice habits, they grow. I practiced joy a couple of years ago and my joy GREW! I practice #gratitude daily, but not really publicly. Right now I’m #grateful I do not have any spelling errors in this photo. #practicegratitude

I am feeling super anxious. This feels like THE week. We just wrapped up Oliver’s birthday, Dad’s Birthday and Mother’s Day. This week is Lucy’s birthday at school, her school recital, ballet recital and birthday party. Then after that, Henry has several events because he is wrapping up his school year, too. When did May become our busiest time of year. It makes December look like a breeze. Hands down.

And in the midst of all of this is the coal ash. The Walnut Cove Town Council has their meeting tomorrow night and I am not completely comfortable with not going. I feel like this is the crux of the issue. This is why we are here.

I will never forget the night I shot straight up in the bed at 4 in the morning and realized they were going to frack the land across from the coal ash pond. We were still living in DC and in the midst of trying to keep St. Philip’s in Germanton. Perhaps it was the spirit of St. Philip or Louise, Lillie and Millie who alerted me to this issue that lit the fear of God into me.

Now three years later, the town of Walnut Cove voted unanimously to test drill for fracking in Walnut Cove two to three miles from the coal ash pond site. And so now is my chance to go and speak to the community at large and I am not going. Lucy has ballet. And Henry has a speech on Wednesday that he is getting paid for. So it is an additional gig, which is important.

First, I have to realize that this fracking and coal ash is not just about ME showing up. I have shown up already. I have called people, developed relationships and provided information. I have prayed about it, granted probably not nearly enough but I have. And I see God at work. I have told others that I see God at work. And the truth is, I need to have greater faith in God. I say This is happening. I even planned it in my speech at the webinar from last week. But I need to start believing that God is in the details. I need to rely on my faith. I need to believe that this does not all rest on me.

A few months ago, I dreamed that I was on Friendship Road. I was right in front of Sherry Montgomery’s house. There was a large pile of rocks the same size as the rocks I see every morning in the bend of the railroad tracks. I was flying above assessing the situation. I finally realized, I can’t do this by myself. Later, as I looked back at this dream, I realize that the rocks were at the top of the road for Peace Baptist Church. After spending a year with Peace as my own word, I was startled by this component of my dream.

I think that what it comes down to is this. I have spent most of my life struggling with where faith meets action. I grew increasingly frustrated with hearing prayers after prayers over issues that nothing really happened. Nothing changed. And I felt like these prayers were answered differently than I would have hoped because there was a lack of action. And soon I came to feel that really what we are praying for is to get up the strength and courage to do the hard work. And it was all about our actions. We implement God’s plans. But am I short-changing God here? Giving myself too much credit? Really showing a lack of faith? Where do I fall on that continuum of apathy and action? Where do I let go and let God? And how do you ever know? Especially when you are facing such a large issue, a God-sized issue that is so complicated and unjust that it is not going to be resolved with a smile and a handshake.

But I believe in miracles. And I realize this is calling for a miracle. Seriously, an against-all-odds miracle. This is going to require a major miracle to save Stokes County. And my hope is that this will all pass away without anyone realizing how close we were to disaster. God, please hear my plea. Please. 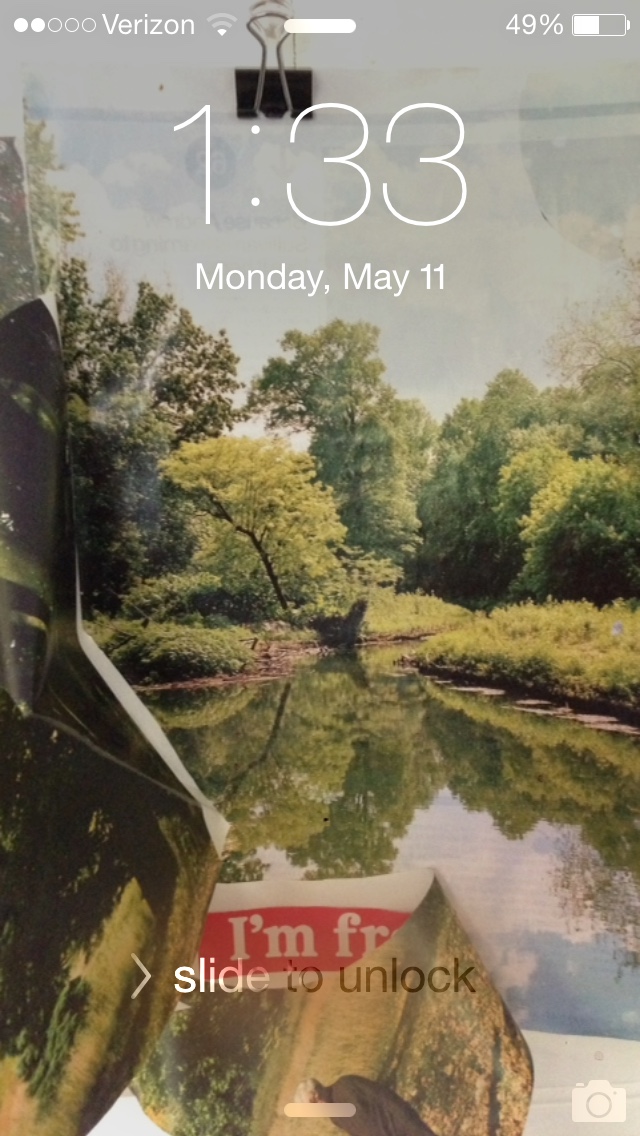 I updated my cell phone to have the final scene from my 2015 vision board on my screen. It is a reclaimed river from New Jersey. The water is beautiful. The large white words underneath the image read: “I am freer now.” I pray and hope we will find some resolution with the mediation being held by Duke Energy. And that the fracking will be held up as a result of that. The image of the water is not unlike the scene I looked at every Sunday in church behind the Baptistry. It looks like the Jordan River, which Henry told me is sick and heavily polluted. He wouldn’t dare dip in it when he visited Petra years ago. But it will be a nice reminder for me to keep the faith this year.

Turns out, these conflicted feelings came right before I spoke out several times the summer of 2015 and even learned that my voice IS important during the process.

I reminded a friend last week about how things may be happening in your life that you cannot see, except in hindsight. (That’s a whole other blog post or chapter in a book.) So you have to trust that things are unfolding and you are not in control of the situation. And for that, I am grateful.