Our Trip to Chicago

Whew! We are back. Laundry is in and we are completely unpacked. Distracted by another visit with Brendan and a scheduled three-hour fire alarm test in our building, I am trying to finally post some pictures and document our first family vacation.

We were very excited to go to Chicago. Henry and I kept talking about going for most of July. So when his work asked him to go to do some recruiting, we were happy to tag along. How fortuitous.

The flight went well. Lucy only started crying when we were waiting to unload from the plane. That isn’t too bad. We had a bottle prepared for both take-offs and landings. On her first flight, she decided that she was hungry as the rest of the plane boarded. So by the time we were taxiing down the runway, we had to move on to bottle number two. A few minutes later I made a trip to the bathroom and she returned to her seat only in her diaper. We did have a change of clothes for her back in her seat, but I was a little wary of the whole bathroom experience. Long story short, it was much easier than I expected. However, I’ve decided that I am going to write a separate entry about my experience of traveling with a baby – including a few tips. More on that later. For now, back to the trip… Thursday night included a walk along the Magnificent Mile and up to the top of the John Hancock Building. Henry was working all day on Friday. We didn’t realize it until soon after we arrived that his interviews were being held in the hotel suite. That was fine, except I ended up stuck in the bedroom until lunchtime. The interviews rolled on through the mid-morning break. Fortunately the bedroom included a sink because I wasn’t able to even use the bathroom. The door was in a bad spot for me. So Lucy and I spent the morning taking pictures using the QuadCamera. When we were finally able to make our escape, we headed out into the world and waited to meet up with Dan. Dan took us to his favorite grocery, Fox & Obel, and on to Millennium Park, home of amazing public art and architecture, including Cloud Gate, also known as the shiny bean. People really get creative while taking pictures in the reflection. This is one of our many family portraits at this site. Can you find us inside the bean? Here is Lucy in front of The Crown Fountain, another amazing installation of public art. A video portrait of one of a thousand different Chi-town residents streams constantly. Every once in a while, the person will open his or her mouth and water will pour out. It was a little cold for her to dip her feet in the water, but a lot of people were eager to get soaked by the open mouths.

We ate dinner at The Gage and then took advantage of the Free Fridays at the Art Institute of Chicago. The new modern wing is amazing. I am pretty sad that we didn’t make it to a couple of the last rooms, but we were headed for a melt-down. I may have attempted to feed her there, but all of the benches were low and backless in the middle of a very crowded room. I just couldn’t pull the trigger. And we were both exhausted. We hailed a cab and headed back. As in DC, taxis and commercial vehicles in Chicago are exempt from car seats. On Saturday morning, we headed northwest via taxi to Bucktown/Wicker Park to meet up with Kate, Chris and little Simon. I’m not sure why but we didn’t manage to take a single picture with Simon. How sad! I guess we were too busy enjoying brunch, which we ate at Irazu, a delicious Costa-Rican restaurant. It was a little bit off the beaten path. I mean, maybe not really, but we walked for a while to get there. (Remember this point for later.) So after lunch, we headed back to the main drag to check out Quimby’s a completely engrossing book store. I am not sure how I made it out of there without a couple of new titles for my bed side.

Then we also hit several thrift shops and Zella Brown, where Lucy spontaneously started screaming. I used to believe that she was too busy checking out new places to cry in public. This was definitely not the case. Her screams might have sent Simon over the edge, because soon after we all decided to pick up Henry from Reckless Records and abort the mission. He managed to acquire a little gospel funk before I gave up on my destination of Renegade Handmade. I don’t want to know how close I was. I should have mapped out the Design*Sponge Chicago guide in advance. The only set plan we had the entire vacation were dinner reservations at the Publican, a restaurant Henry first heard about on Anthony Bourdain’s No Reservations. I’m never sure what people think when we show up with a baby strapped to one of our bodies. We are going to keep doing it as long as we can. Besides, the crowd in this place could definitely have drowned out any of her cat cries. No fear. Lucy slept the entire time and we had the best meal we have eaten in a long, long time. Henry even picked up a business card as we left. Considering we had a huge fight over me packing the ephemera I had accumulated throughout the trip, this is a MASSIVE compliment. According to Henry, the Publican is “based around the holy trinity of beer, shellfish and pork.” Hmmm… I like pork, but I don’t LOVE pork. Let’s face it. I’m from the South. My grandpa raised pigs for their meat. I have countless memories involving pigs and pork. All by the time I was ten. So I was not really sold on the idea of eating pork rinds for an appetizer. But I must say, if I were to eat a pork rind, this is it. No greasy aftertaste. But do pork rinds have a greasy aftertaste? I have no idea. I’m pretty certain I haven’t eaten one in a solid quarter of a century. Wow. 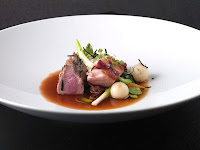 Henry even downloaded these photos from the Publican website. He did have the Potee, pictured first; we didn’t have the charcuterie board, though, and started with oysters instead. I informed the waiter, a shorter version of Vinnie Chase from Entourage, that I was trying to avoid dairy because of Lucy’s food allergy. But the squid ink fettucine with shrimp was calling my name. No problem. They would just leave the dairy out. So delicious. I actually doubted that they had left out the butter. I must say that everyone who came to our table was aware of the dairy sensitivity and left it out of other dishes we ordered. I was very impressed. Everything was so good. Who needs dairy. Even the melon and blackberry sorbets. Yum. Okay enough.

After returning to our hotel, we decided to check out Navy Pier. They have fireworks every Saturday night in the summer. On our way out, I noticed our friend Doug from Jersey City walking in front of us. I would have never recognized him except Lauren had emailed me to ask if I had seen him just that morning. He was in Chicago for the weekend. We ran through our trips and we had hit the same highlights. The even crazier part of the story, they ate at the same Costa Rican restaurant for lunch the same day. Just a couple of hours later. Weird. Sunday… we hung out in the Loop before our architectural boat tour. If you go to Chicago, you have to leave room for a boat tour. What a way to see the stunning architecture. And finally, we ate dinner at Gino’s East. I ordered a thin cheeseless pizza to stay true to my dairy free diet. But once Henry’s deep dish pizza hit the table, I caved and had half a slice. Not only was interesting to taste my first deep dish pizza, but to taste my first cheese in ten weeks. I had already eaten some dairy earlier in the day. They buttered my English muffin at breakfast at the West Egg Cafe. And I was so hungry on the boat tour that I ate two of the free oatmeal cookies. Yesterday, I thought no harm done and even added a little tzskiki sauce to my sandwich. Today I’ve seen the repercussions – a chapped butt, big burps, breathy gurgles and much more spit-up. Sorry, Bear, but when in Rome… I promise to not cheat again. If you have made it this far, I hope that you will be as amused as Henry was by the American Girl phenomenon that flooded the Magnificent Mile and surrounding area. There were American Girl bags everywhere. But nothing topped the young girl, who placed her doll in the seat next to her and had the waiter bring her a Coke. I am pretty certain that was a treat for Elizabeth, considering they didn’t have Coke in 1774. And, no, I don’t think she was served a piece of pizza.