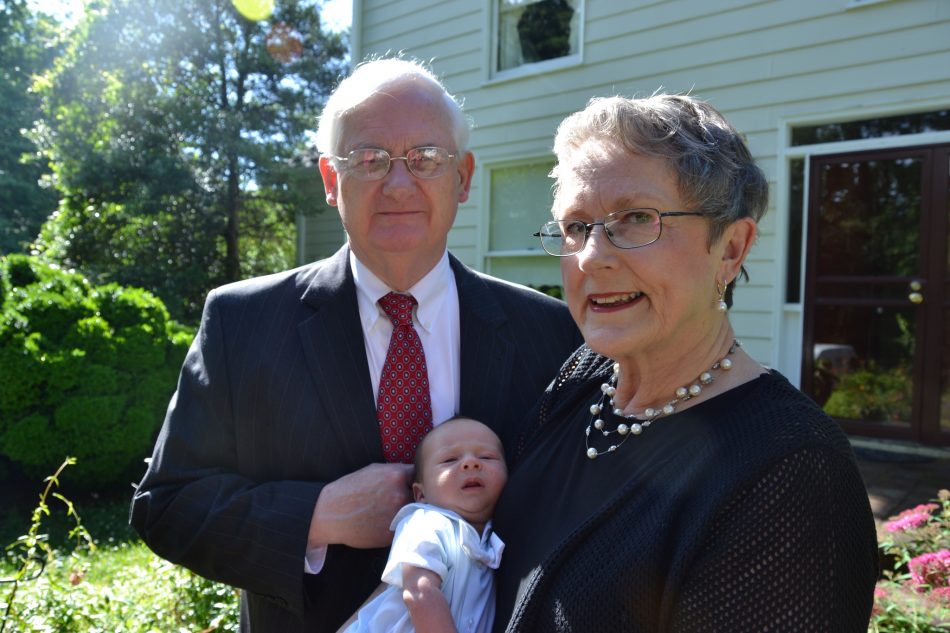 When Do Babies Grow? *I found this post in my draft folder. It was written after the passing of John Watts in the summer of 2013.

Every day Oliver keeps getting bigger and bigger. He has already switched to a size one diaper and can barely snap those teeny newborn onesies anymore. He is growing at a much faster rate than Lucy. Granted he weighed a pound a half more at birth. But we think he is going to be long and lean. This baby seems to have a lot of Watts shining through, even the pale skin.

So when do babies grow? They are a lot like flowers. You know they change from day to day, but you don’t actually see the growth with your very own eyes.

The weekend before last I snapped this picture before we headed to John’s funeral. I dressed Oliver in a little sailor’s outfit of Alex’s. I found a disintegrated trash bag full of our baby clothes in mom’s attic. This little outfit was super sweet, even if the elastic in the legs had dry-rotted, but that seemed insignificant. And it snapped fine.

We expected a large turn out for the funeral, so we arrived just before 10 am. We found a reserved seat with the extended family. Then I went downstairs to the fellowship hall to nurse him before the service started at 11. I was so nervous about where I was going to put him in for the service. Would he cry? I had the options of my car seat or two different carriers loaded in the car. I ended up holding him in my arms. I came back upstairs in plenty of time to rock him to sleep during the prelude.

The funeral was a beautiful service with wonderful eulogies about John and King Moravian’s full choir accompanying the stunning pipe organ he was so proud of. The pastor began the service saying that today would be all about Music. I was taken aback because as soon as I had learned of John’s accident, I kept thinking of the word Music over and over again. I even sent a text to my family saying I thought they should play music to help with facilitate his recovery. Little did I know how severely injured John was. I guess I should have been expecting that as the theme for the service a week later.

I was so thankful that Oliver slept throughout the entire service. I swayed back and forth to the music and even stood to sing the hymns. His behavior could not have been better. He made one little peep close to the end. I promptly stuck my finger in his mouth and he fell back asleep. I only hope I didn’t make anyone seasick behind me.

The complete service lasted over a hour and a half. Plus we were there an hour early. By the time we made it to the car, Oliver had a wet diaper. The snap popped, but I managed to close it again. After the funeral procession to Germanton, I changed his diaper. At that time, there was no hope. I could not manage to even make the snaps connect even with a dry diaper. He had grown in my arms in just over three hours!

During the graveside service, I tried to keep Oliver’s outfit pulled down in place. The afternoon sun was rather hot and everyone was sticky after a week of rain. We were both suffering from wardrobe malfunctions, since the front of my dress was not behaving either. By the end of the graveside service, it was clear that Oliver would not be wearing Alex’s newborn outfit again.

We ended the service by singing Happy Birthday to John. He would have been 55 the next day. It was easily the most heartbreaking Happy Birthday ever. Quoting his son, John was larger than life. It is hard for me not to dwell on the fact that there were FIVE new boys, not three, that are descendants of my great grandparents over a two month period. Three of which are named Davis for my great-grandmother’s maiden name. They have large shoes to fill. Maybe that’s why there are five little Watts boys. I am curious to see how many will share John’s preference for no socks.