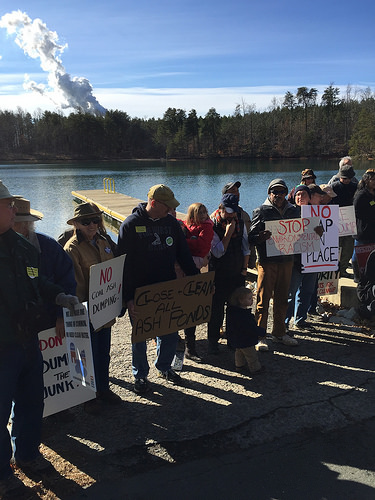 Today, I Prayed We #kickcoalash

Today Residents for Coal Ash Clean Up met at the Belews Lake boat dock over looking the Duke smoke stacks. Tuesday marks the one year anniversary of the coal ash spill into the Dan River in Eden. And while it was the third largest coal ash spill in our country’s history, it is only a drop in the bucket of what would happen if there was a spill at Belews Creek into the same Dan River.

Duke Energy is currently in mediation over which coal ash locations they will clean up. Belews Creek is the site of the largest coal ash pond in the state of North Carolina and it is currently on the low priority list. WE WANT TO BE A HIGH PRIORITY.

Sarah from Appalachian Voices asked me to speak at today’s event. Of course. I am glad to do anything. Yet, I procrastinated on writing my speech until this morning. That’s really bad news considering it was a morning event and we live an hour away with two kids in tow. But I am glad I did, because during the night I realized that I needed to pray. The reality is the media will only cover what they want. After my speech in Raleigh, they summed it up to basically “Caroline Armijo is upset that her friends and family are sick.” But I saw today as an opportunity to have a large crowd gathered by the lake where we could pray. If I had gotten out of bed at 4 am, I am certain that God told me what to say word for word. But I didn’t. So I did the best that I could this morning at 8 am.

Here’s my speech/prayer, including the part I forgot:

Good morning! My name is Caroline Rutledge Armijo. I am a native of Stokes County and I currently reside in Greensboro. Thank you to everyone for coming out to Belews Creek today. We are here because we want Belews Creek to be included on the High Priority List for Duke’s clean up.

A year after the spill in Eden, we want to warn North Carolina and the country that we are standing at the site of the largest coal ash pond in Duke’s system – a horrifying 342-acres in some areas over twelve stories deep. This is the largest coal-ash risk to North Carolina’s water, land and air.

In 2009 Belews Creek was classified High Risk for failure. That means Duke has known for over five years that the earthen structures are highly likely to fail and people will die. But Duke just wants to plant some grass on top.

Without the threat of catastrophic failure, the unlined coal ash pond is still a problem. Water from the pond is released into the Dan River EVERY SINGLE DAY. This is Madison’s drinking water, which Duke actively “corrects” by adding chemicals to the river. (I forgot this paragraph.)

If you watched the At What Cost video, you will recognize several of our faces. But one is missing. Our leader Annie Brown died in September after suffering from a massive heart attack. She was the very person who asked “At what cost?” Others among us have faced serious health problems, including cancer, strokes and respiratory disorders. Annie had a list of all the people in this community who were suffering from poor health. And for all of these people, I feel led to end this with a prayer.

Here we stand on what feels like sacred space. So many people have lost their lives too soon or faced serious health consequences because of the pollution from this site.

We are all incredibly grateful for the opportunities provided by the power generated here. But now we ask that you heal this broken place. We are faced with the complicated task of just how to do that.

We pray for the strength and courage to demand that Belews Creek become a high priority site.

We pray for the spirits who have passed before us that they may have peace.

And we pray for those who live daily with the illnesses they face that they will be blessed with the very best for their needs.

We pray for guidance, miracles and wholeness.

As we drove back by the church where we gathered that morning and each month, I noticed the sign:

Nothing is impossible with God.

This IS going to happen. But we all need each other’s help.