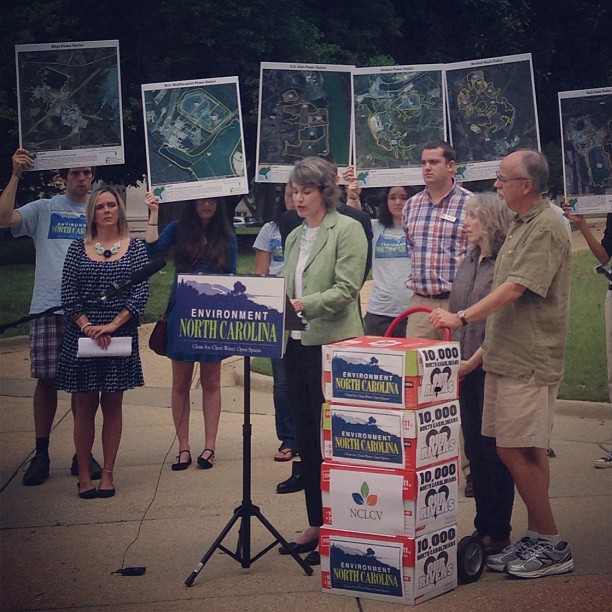 Speaking Out Against Coal Ash

On Friday I shared the following concerns regarding North Carolina’s new coal ash bill at press conference in Raleigh.

My name is Caroline Rutledge Armijo. I am proud to call Stokes County home.

In February while thousands of gallons of coal ash spilled into the Dan River in Eden, all of my Facebook friends from Stokes County were praying for a ten-year-old boy dying of cancer. He had a rare brain tumor. This young boy grew up and died within a few miles of the Dan River and even closer to the Belews Creek Coal Ash ponds.

Less than two miles away, one of my friends had already faced a similar battle. In August 2010, Danielle underwent her second craniotomy at the age of 33. She didn’t drink nor smoke. Why did she have cancer?

But I was not completely surprised. That summer I had lost numerous loved ones to cancer. And the same week she had her surgery, my neighbor died from complications with his brain tumor. His best friend had died of a brain stem tumor in 2007. They were avid fishermen and loved to fish on Belews Lake. Earlier that August, my mom’s cousin died of a rare form of leukemia within two weeks of learning that she had it.

I lived in Washington, DC from 2005 until 2012. During that time, I only knew of three people who had cancer. And one of them had survived. How could there be so many people dying back home?

The two new smoke stacks that costs millions of dollars make the community a lot safer. But I am afraid that the highly-scrubbing efficient scrubbingcy creates a super toxic coal ash, which explains the uptick in cancer rates and rapid deaths. Most people LIVE with cancer. But in Stokes County, there are way too many people who passed away within a month of their diagnosis.

What’s even scarier – There is a 345 acre unlined coal ash pond at Belews Creek, which in some areas runs over twelve stories deep. It contains 25% MORE coal ash than that of the ruptured pond from Kingston, Tennessee, which they are still cleaning up TODAY. It has cost their state BILLIONS of dollars since 2008.

In 2009, Lockheed Martin deemed this unlined coal ash pond a High Risk for failure, which means if this dilapidated dam fails, people will die. There is a map of the flood plain showing where the ash will wipe out Walnut Cove and Pine Hall. Not only are people currently facing serious health concerns by living with coal ash, they are also at real risk of this coal ash pond flooding their homes, churches, places of business and killing them. And of course, the Dan River is at risk, as well.

Two years ago, my first cousin, Rick discovered he had a brain tumor. I started emailing people to find anyone to help me bring this issue to the forefront. Thank you to Appalachian Voices for knocking on doors in the Belews Creek Community and helping us find our voice.

I am happy to report that both Rick and Danielle are healthy and doing great. But not everyone has been so lucky. I’m here to speak for all of the people living with serious health issues and for those who have already passed away – for Anita, Hansel, Randy, Jan, Sham – the list goes on.

I don’t believe these cases are a coincidence. My hometown deserves answers, and we deserve the attention and compassion of our elected leaders.

I’m calling on Gov. McCrory to take serious action for the communities across the state who are worried about this toxic threat. People deserve clean drinking water and the right to a healthy future. We cannot risk leaving this coal ash pond in place. The stakes are too high.

We cannot risk the life of another ten-year-old boy, who was doing exactly what he was supposed to be doing – spending time outside playing and living life to the fullest in his home and community.