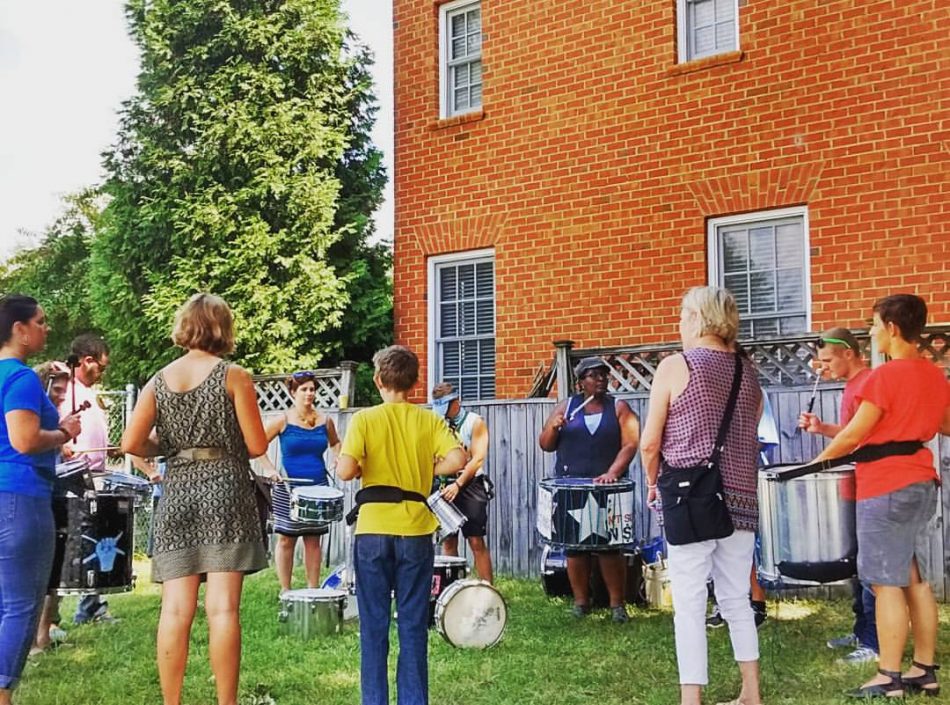 Speaking at the People’s Power Party

I shared the following speech as part of the People’s Power Party at Beloved Community in Greensboro. They are the church being sued by Duke Energy for putting solar panels on their roof with the help of NC Warn. Yep. Third party sales are illegal in North Carolina and this falls under that category. So I wanted to hear more about Beloved’s story. I was so honored when I was asked to speak a few months later.

The week after I gave this speech, I heard about the term “amplification” from female White House staffers. I guess I was in keeping with the news with my shout out to Donna Lisenby below. I am dying to hear her story. Enough so that the notion of it makes me want to start a podcast. I would definitely need some technical assistance with that project!

Thank you to Kim Porter for inviting me to speak and for taking this awesome picture of Cakalak Thunder giving drum lessons. I had every intention of brushing up on my drum skills at the People’s Power Party. But I was in a session featuring Soul Ash Picture’s great new docu-series about Belews Creek and Dukeville.

Little known fact: I was on the snare drum line in high school. For the first time ever, I dreamed that I was drumming after a speech in Raleigh. I think the dream was inspired by Alessia Cara’s Wild Things, which was our end-of-the-school-year jam.

I am so excited to be here this morning! My name is Caroline Armijo. I am a Greensboro Resident, but I grew up in Stokes County, which connects to Guildford on the NW corner.

We are here to talk about harnessing our People Power and I wanted to share a little about my experience of doing just that around coal ash, which has a tremendous impact on the Belews Creek Community about an hour away from here.

Belews Creek is a rural community and the perfect example of areas experiencing the divide of our culture wars. However this community is united. We are standing up for clean water and health.

Prior to our organization of Residents for Coal Ash Clean Up in 2013, people started sharing their stories and listening to the hardships they were facing. My mom told Annie Brown, her dear friend, about my concerns regarding coal ash. Annie started filling up a notebook with all of the people surrounding her in the community. We were able to organize quickly with the help of Appalachian Voices.

Prior to that No Fracking in Stokes County galvanized as a state leader in the fight against fracking in North Carolina. The very land that is contaminated by coal ash is at risk for fracking. We began to use coal ash and fracking in the same breath. One of two things would happen: they would frack the land and there would be a catastrophic failure of the 12 million ton coal ash pond OR the fracking wouldn’t happen and the coal ash would not be cleaned up. Both options are detrimental to the people living there.

At the local level, organization led to moratoriums passed by our local government, to which the NCGA responded with limiting legislation in the dark of night. We have also advocated for voting rights for the Walnut Tree, which is JUST outside of the town limits. We celebrated a victory of two new Walnut Cove Town Council Members with the help of the NAACP.

At the state level, Belews Creek is the site of the first meeting of the Alliance of Carolinians Together against Coal Ash, a coalition of the fourteen Duke sites around the state, plus Lee and Chatham County, where they are receiving the ash in their landfills. There we drafted our unifying principles, which guide how we advocate for clean up across the state.

At the national level, Belews Creek hosted one of two hearings on the U. S. Civil Rights Commission on Coal Ash collecting the testimony of our citizens and leading scientists, lawyers and activists from the entire East Coast. The recommendations were shared with the President and Congress.

At the international level, this week we learned great news that Riverkeeper Donna Lisenby traveled to Norway to ask that they dump Duke from the Norway’s Government Pension Fund Global, the third-largest public investment fund in the world. And they did, citing Duke’s failure to clean up coal ash in North Carolina. That’s what winning looks like!

For me personally, I have focused on my energy on three main areas: sharing our stories, keeping faith that we will find a better way, and focusing on a new vision of Belews Creek being the model of a world class clean up and recycling center at one of Duke’s premiere facilities.