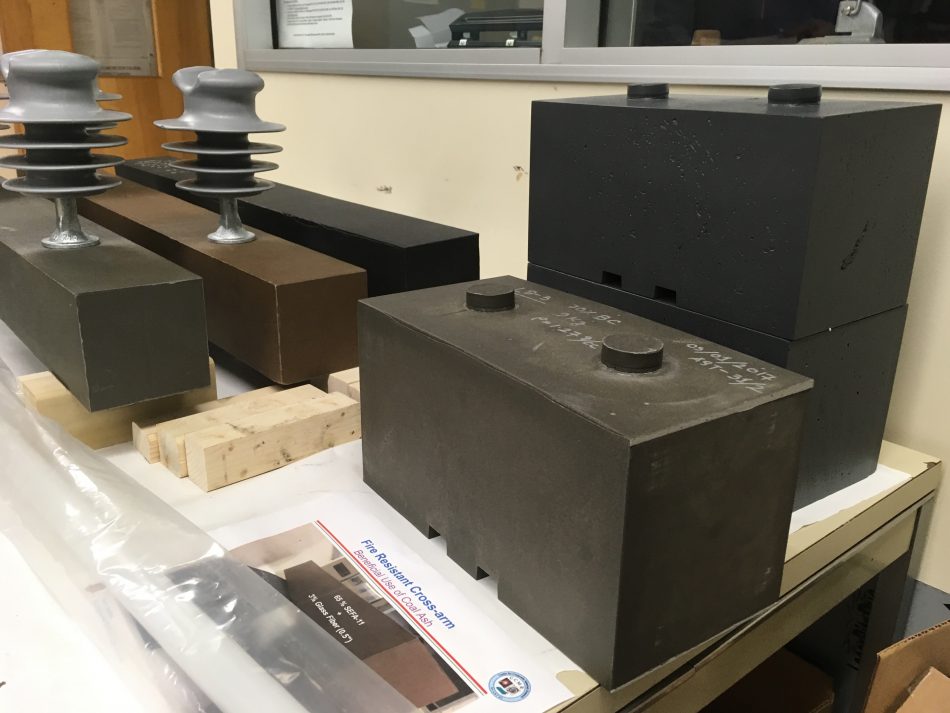 Sharing Prototypes from the Lab

This past week I returned to A&T to check in. After a lengthy discussion with Dr. Shivakumar and Wade, I headed down to the lab. Much to my surprise, it was full of prototypes. The team looks like they are ready for a pilot plant at Belews Creek.

To the left in the photo above are much lighter version of cross arms, which surround us everyday on the top of utility poles. The insulators are the same as those currently used. However cross arms are either made from heavily treated wood or out of steel, which is very heavy for the installing workers and, heaven forbid, a failure due to an accident. 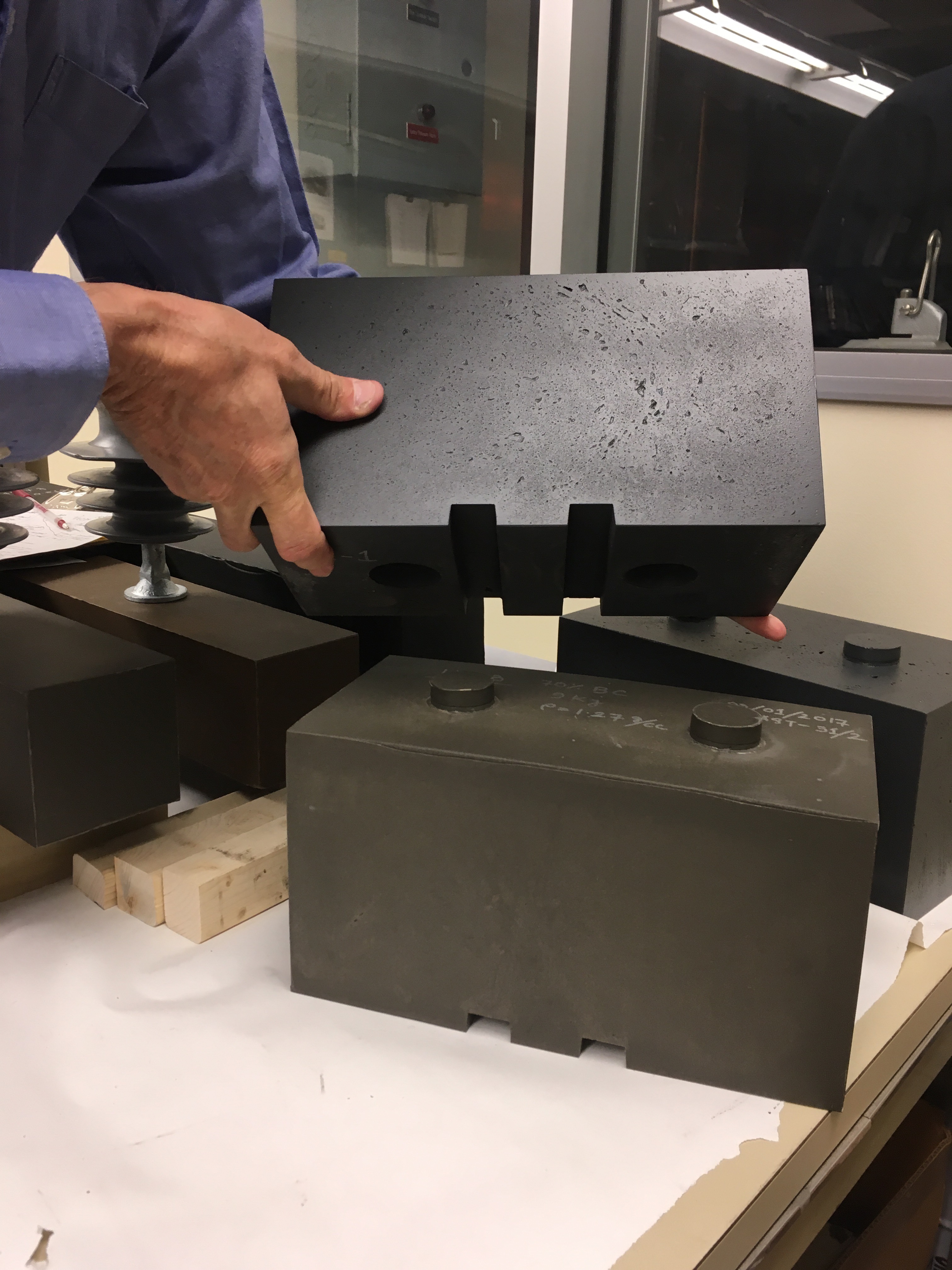 This is the Lego-like block, which I first approached them about after watching my son play! The full-sized version is closer to the size of a table. The small notches on the bottom allow for a fork-lift to move the blocks of ash and easily build an interlocking wall. 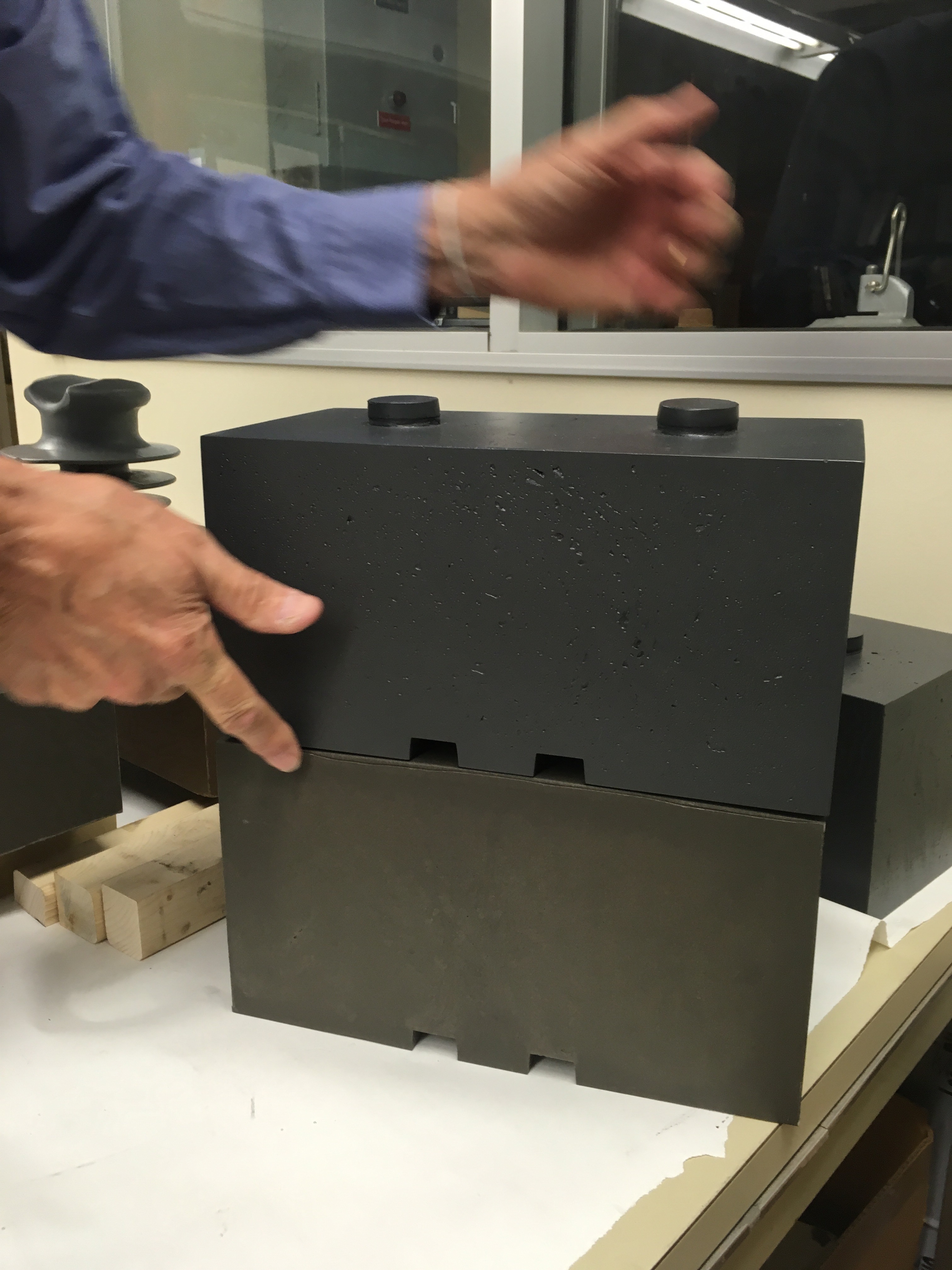 These large blocks can be used to create a barrier for sea walls or to contain hog or chicken waste. Wade explained rubber tubing seals the blocks to waterproof it. The wall would prevent the waste from overflowing the earthen dams into our water ways. Animal waste is a significant problem for North Carolina. 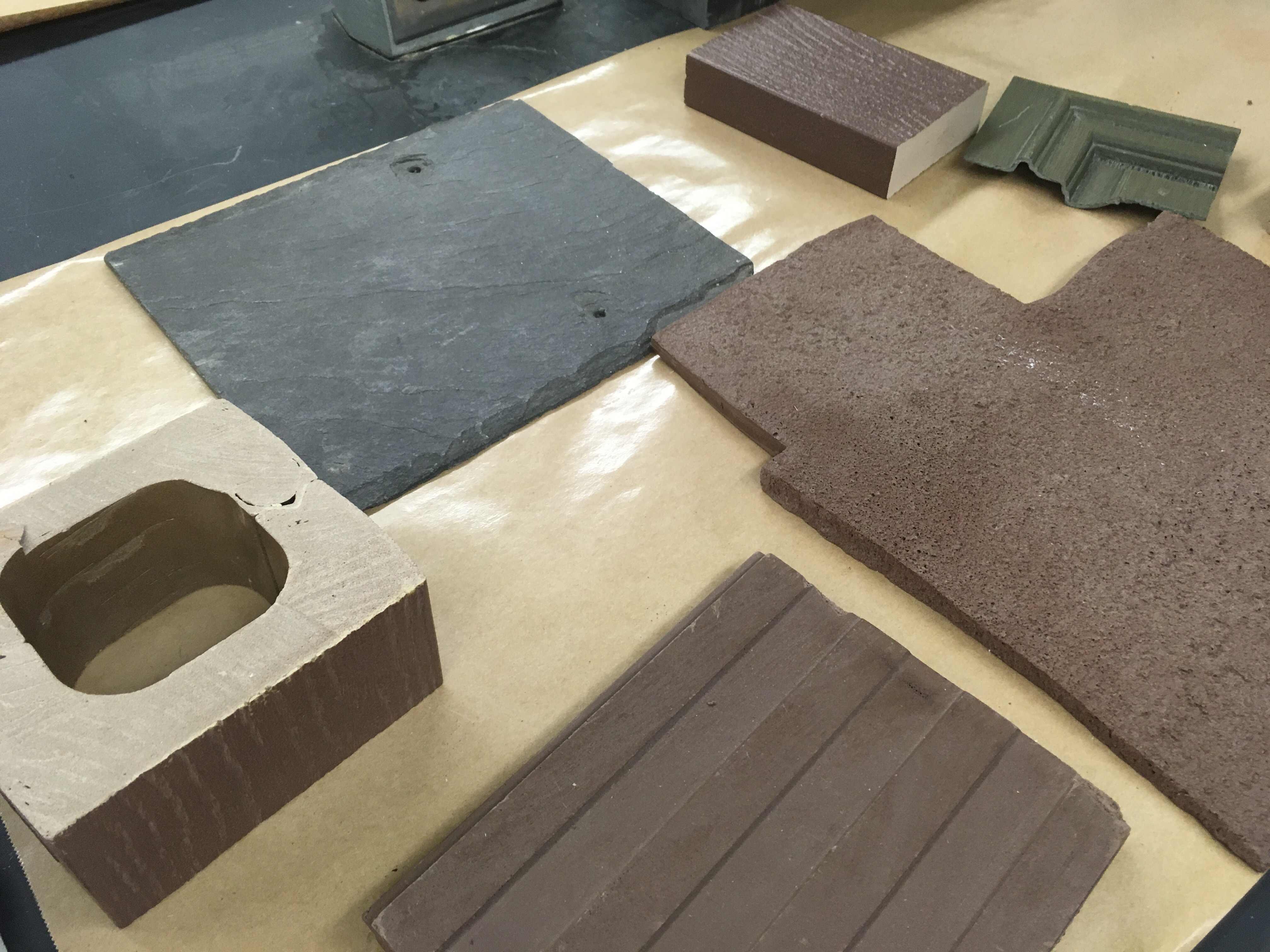 These various housing materials all include coal ash. The faux slate is very light, like plastic. It weighs less than a clipboard, yet looks like a real tile. I’m sure my slate roof friends will be relieved. The red roofing is rubbery and was commissioned so as to protect homes from hail damage. 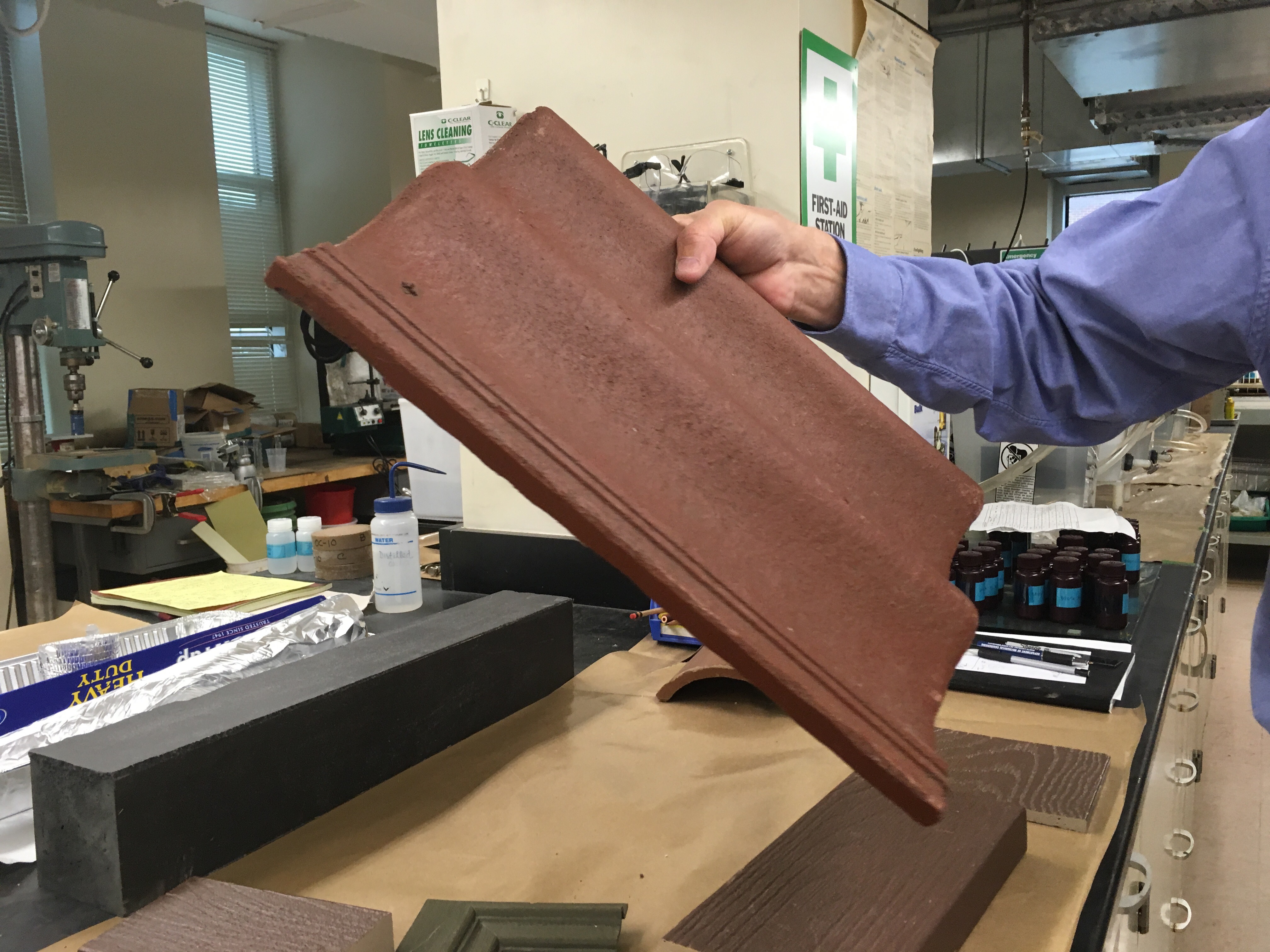 This is a much lighter version of a Spanish clay roof tile. 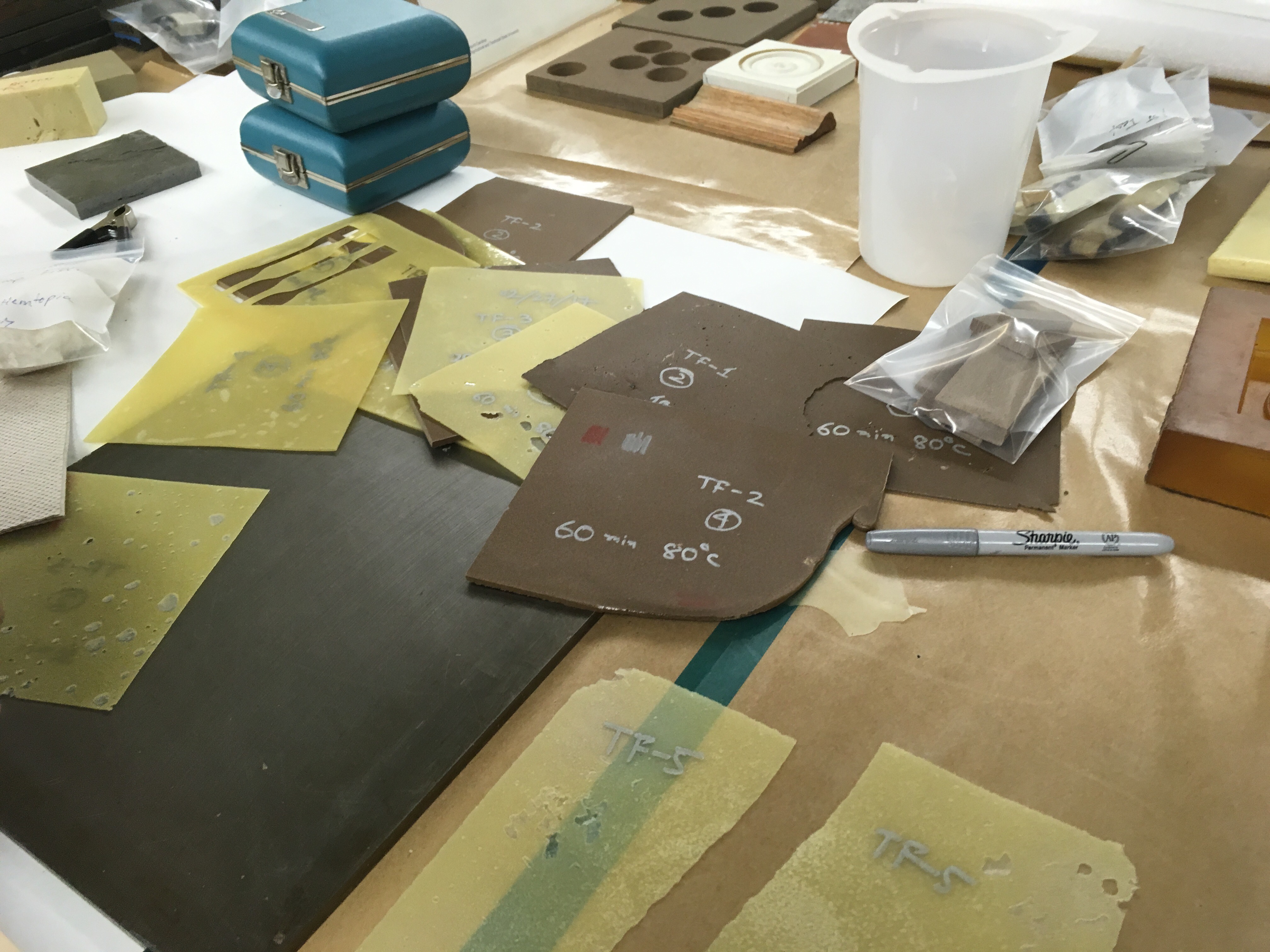 The brown rubbery film above reminded me a lot of a leather feel.

All very intriguing! These prototypes really expanded my understanding of “We can make anything!” Wow!

Not all of the ash produced at Belews Creek is the specified quality needed by the cement industry. The Clean Smokestacks Act changed the ability for the cement industry to utilize all of the ash. It needs to be reprocessed or reburned to correct the carbon. Hence the national shortage of coal ash and why it’s being imported from foreign countries. This boggles my mind. We have 180 million tons in Storage in North Carolina alone.

Fortunately the encapsulation process at A&T does not require reprocessing. They can use production ash as is, as long as it is dry. They can also use pond ash once it is dried out. To get started, we want to see a pilot plant at Belews Creek to develop new products with fresh ash.