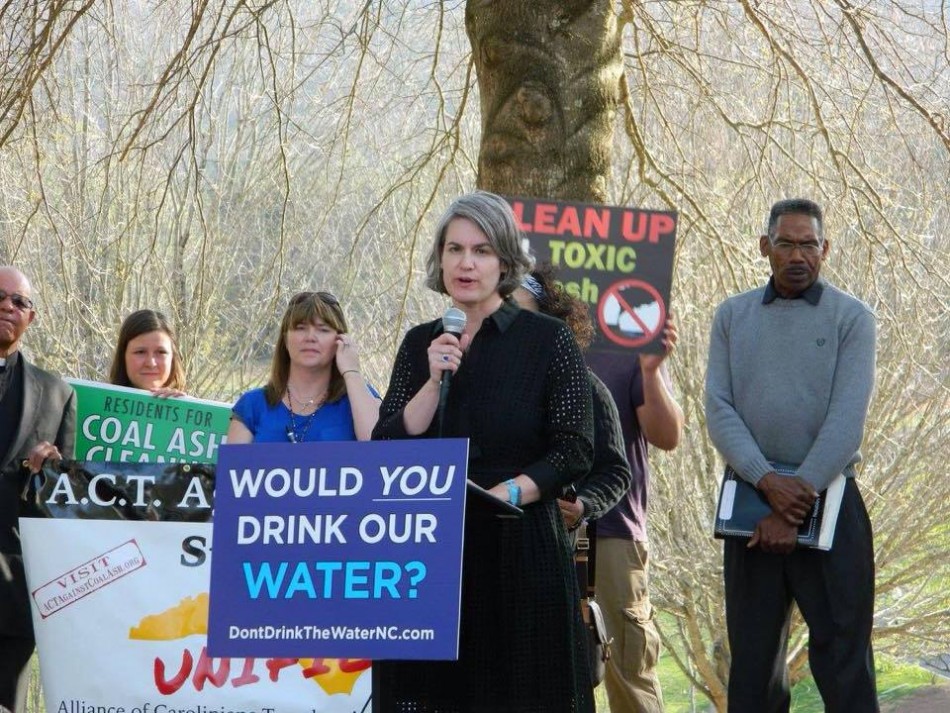 Last night was the much-anticipated DEQ Hearing to classify Duke’s largest coal ash pit at Belews Creek. Falling in line with most other coal ash related revelations, the event fell on a prominent day of the Liturgical Calendar – Maundy Thursday. So we held a prayer vigil.

The Spirit was definitely moving on the mountain. A few people trickled in while we were speaking. As we moved to the communion portion, car after car drove up the mountain as Rev. Hairston shared the elements.

I am so grateful for the high turnout of citizens at the DEQ Hearing in Danbury. Especially for those willing to speak out on the dire circumstances they are living with daily. It is powerful to be part of this dynamic community, which crosses all cultural divides painfully felt throughout our country. The momentum surrounding Belews keeps building daily.

We want to work together with the state to create a permanent solution that encapsulates the coal ash above ground so that it no longer poisons our air, water, land, and most importantly, our people.

We have to move away from the notion that lined landfills are an acceptable option. They are not.

Following were the words that I shared:

In Sunday School, I teach a children’s story about Abraham. He goes to the top of the mountain and he is so close to God that he knows exactly what to do.

Today we stand on top of our mountain and we know exactly what to do. Isaiah 55 tells us to call out to God while we He is near.

We often think of the word Hosanna as a word of praise like Hallelujah. But it originally meant Save Us Now, I Beg You.

Help us Rise Up as a community and demand that Duke Energy, DEQ and our state government rectify this coal ash crisis that is crippling our state.

Resurrect the remains of the Appalachian Mountains buried in our midst and poisoning our people.

Co-create with us a solution that will encapsulate the coal ash permanently above ground so that it will no longer pollute our air, water, land and, most importantly, our people.

We do this because of Jesus’ greatest commandment, which he gave his disciples and each of us today: ABOVE ALL ELSE, Love One Another.

This is so important that Paul talks about Love in First Corinthians 13. If I have the faith to move mountains, but do not have love, I am nothing.

The mountains have been moved here. And it is killing us. With the deep love we have felt for all of the sickness and death we have witnessed over the years, we rise up together and demand change now.

The Press Coverage from the Event

The Stokes News – We Are in Fight for Our Lives