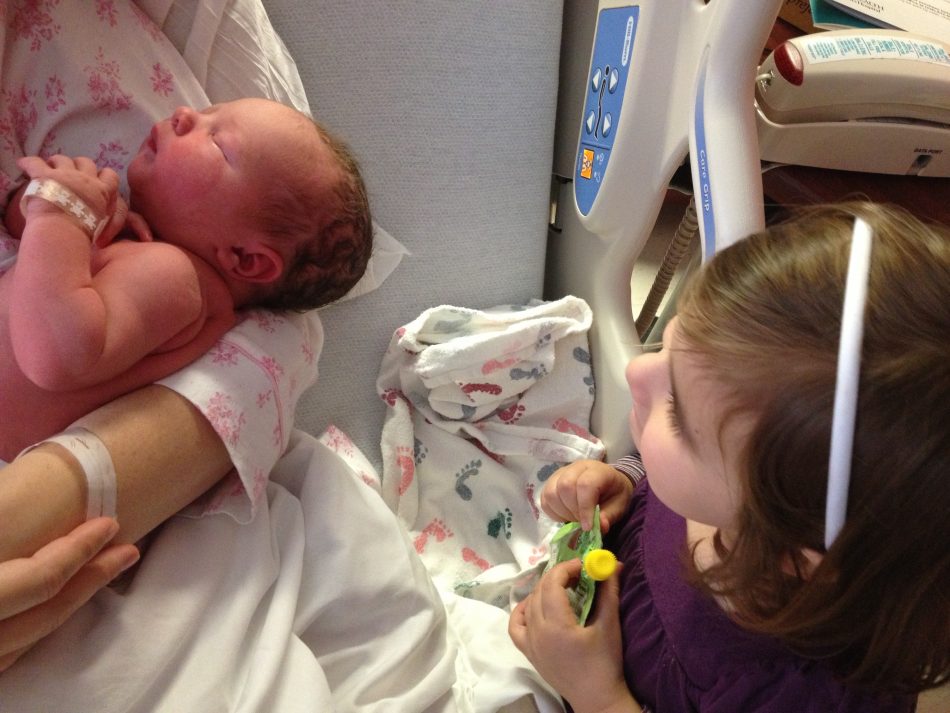 This post is the second half of Oliver’s birth. I posted the first last week. As stated before. I found several forgotten posts under drafts. In my effort to blog twice a week, I thought that I would share Oliver’s two-part birth story almost four years later. We are very content as a family of four. So this is not an announcement of any kind. Mainly just cleaning house… literally and digitally.

The beginning is very choppy list of what happened on the morning of Oliver’s birth. I probably wrote it as an outline and perhaps that format is the reason I never actually posted these two stories. But as I reread it, the style seems appropriate to the feeling of the morning. So I decided to keep it as is.

Monday
4:40ish am – Woke up and just laid there for a minute feeling awful. I sat up on the side of my bed to pee and my water broke. I ran to the bathroom and screamed for Henry. I immediately had the shakes.

I called CCOB and told them my water had broken. Spoke with Hillary. She said that the weather was notorious for breaking water and that I was the third call since midnight. She said she would check my strep test. If she didn’t call back, come in between 6 and 8. I could eat a light breakfast.

I called mom and left a message.

I called Heather about ten til 5 because I knew that she woke at 5 anyway. She said that she could come and get Lucy ready for school.

I called my mom back and told her that she could wait to come closer to Lucy’s pickup.
I took a shower and ate breakfast. I had juice, a hard boiled egg and blueberries. I ate a spoonful of honey right before I left for the hospital.

My contractions were never more than two minutes apart and lasted about a minute. I was timing them on my phone.

We tried to watch Mad Men while I sat on the birthing ball. About 10 minutes in, I was in a lot of pain. I texted Heather to ask her ETA. It was 6:55. Henry packed the car. She arrived at 7:15ish. I met her in the driveway. I tried to sit in the car, but had to get back out because a contraction came as I was sitting. Then I got back in and we drove to the hospital.

When we pulled up to the door, I remembered that I had forgotten my wallet and did not have my ID, but Henry had our insurance card.

I went inside and signed the sheet at 7:25. I was holding on to the counter while I waited for the person to check me in. I don’t think that I was able to sit down. Another woman came in around the same time I did, but she was not in labor. I was willing to box her out. Another couple was sitting in the waiting area. I was doing my best to remain calm.
They took me into triage and I think that I was just saying help me over and over again. She checked and I was 7 cm dilated. They told me that they were going to wheel me back. I told her that I thought I needed to throw up. They gave me a clear bag with a plastic ring on it for my mouth. I sat in the wheelchair and went back to the room.

I got to the room and asked to get in the bathtub. They told me no. The nurse asked if I wanted an epidural. I reluctantly said no. Then I started throwing while standing at the foot of the bed. One of the nurses told me that throwing up was a good thing. I knew that from my reading it would help me dilate. I guess that got me to 10 cm. Once I stopped throwing up, I climbed up on the bed and grabbed on to the elevated head of the bed. I was on my knees and draped over the head of the bed. Finally I said that I needed to push. This feeling was not as obvious as with Lucy. They all told me to push. Finally I reluctantly started pushing in that position. Henry said that he looked at his watch and I started pushing at 8:01.

This is all a blur. I pushed for a few minutes and they told me that if I pushed on my left side, I might be more effective. I tried one push in that position and rolled on to my back in the traditional position. I pushed once more, but the baby was laying to the left of my body. I picked him up and placed him on my stomach and tried to push him down with my hands. Then I pushed some more in that position. I was screaming and cussing. I could imagine Larry David screaming in my head the entire time.

Ironically when I first went into my nesting stage with Lucy, Henry made some comment and I told him that he needed to change his attitude along with a reference to Larry David was not welcome at my delivery. Plus I never cussed or felt out of control with Lucy’s delivery, even pushing for three hours without any drugs. If I pushed effectively during Lucy’s delivery, it didn’t hurt. Granted she was stuck and never descended very far. So maybe that was the difference. But I focused on a flower opening and breathed like a camel. Henry and I slow danced and the doctors didn’t believe that I had fully dilated. I guess I was fairly calm, which is why they left me alone for so long.

This felt very different. It hurt like I couldn’t imagine and I was scared. I felt like a crazy animal. Henry said that it was also different like my body was holding on to the baby with each push. The nurse and midwife did a great job of reminding me not to throw my head back and scream, but tuck my head and push. In between contractions, I could completely rest and not feel any pain. I would even think to myself, I am going to do this. I was so worried that I would have a cesearan, but this was happening exactly how I had hoped. No IV in my hand, no epidural and no other interventions. Except it was much more painful than I could have ever imagined. Granted I did not know about percipitous labors when I was wishing for a fast delivery. Now I know better. Be careful what you wish for.

The midwife asked me if I wanted her to hold up a mirror so that I could see. I sort of held my head up and looked in that direction. But I quickly said no, squeezed my eyes shut and said just pull him out. 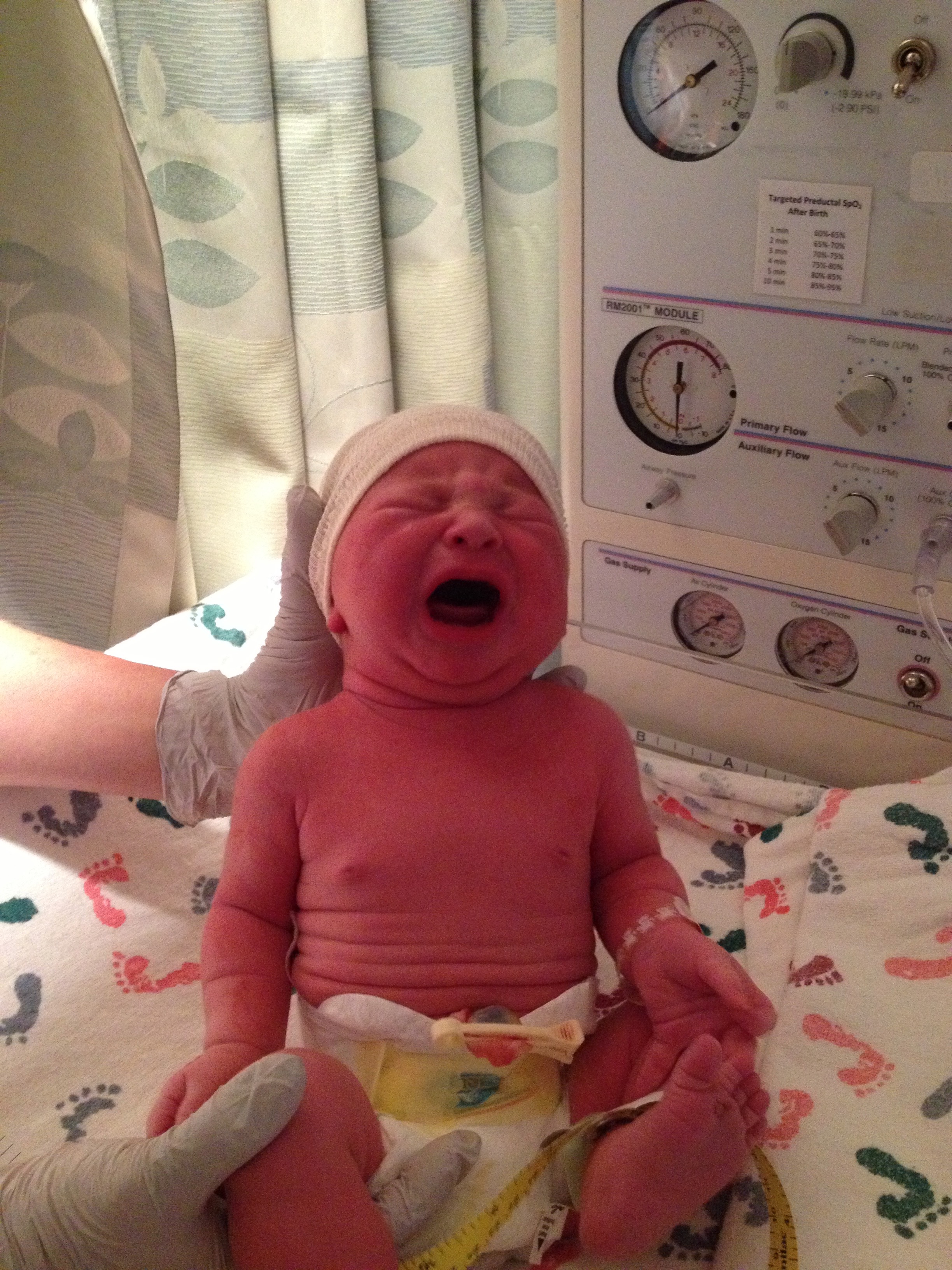 I still had the shakes after my delivery. But once things were tidied up and I was able to relax my legs, everything was great.

Once Henry cut the cord, Oliver was immediately holding his head up and looking around. He has been an alert and content baby ever since. 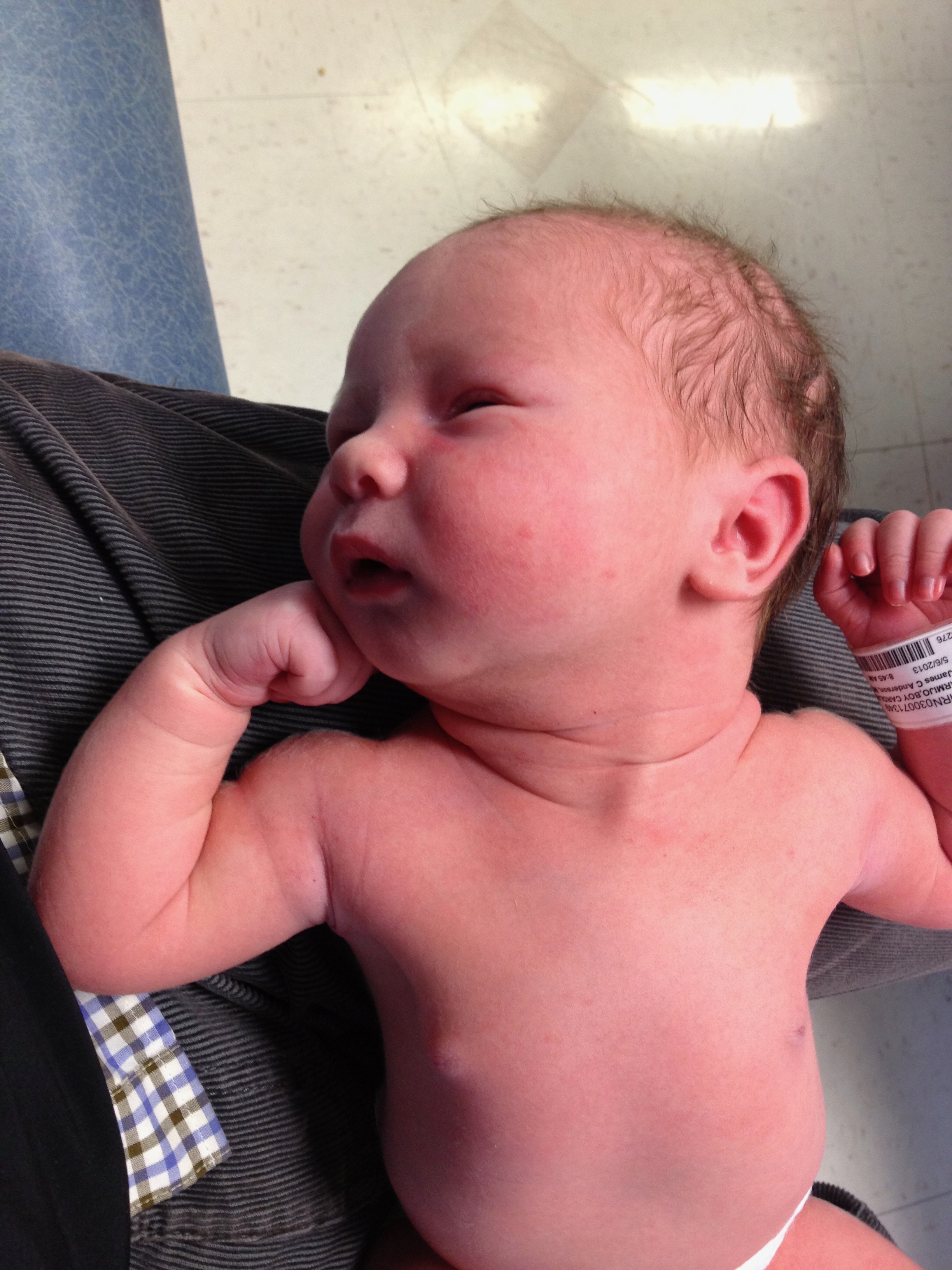 The rumors are true. Natural child birth does give you a rush of hormones that make you feel great. I felt totally together and realized that I wasn’t completely on top of my game when I flushed a washcloth down the toilet. But otherwise things were a thousand times easier than with Lucy’s delivery. Basically both labors started around the same time, but Lucy’s ended a long business day later. 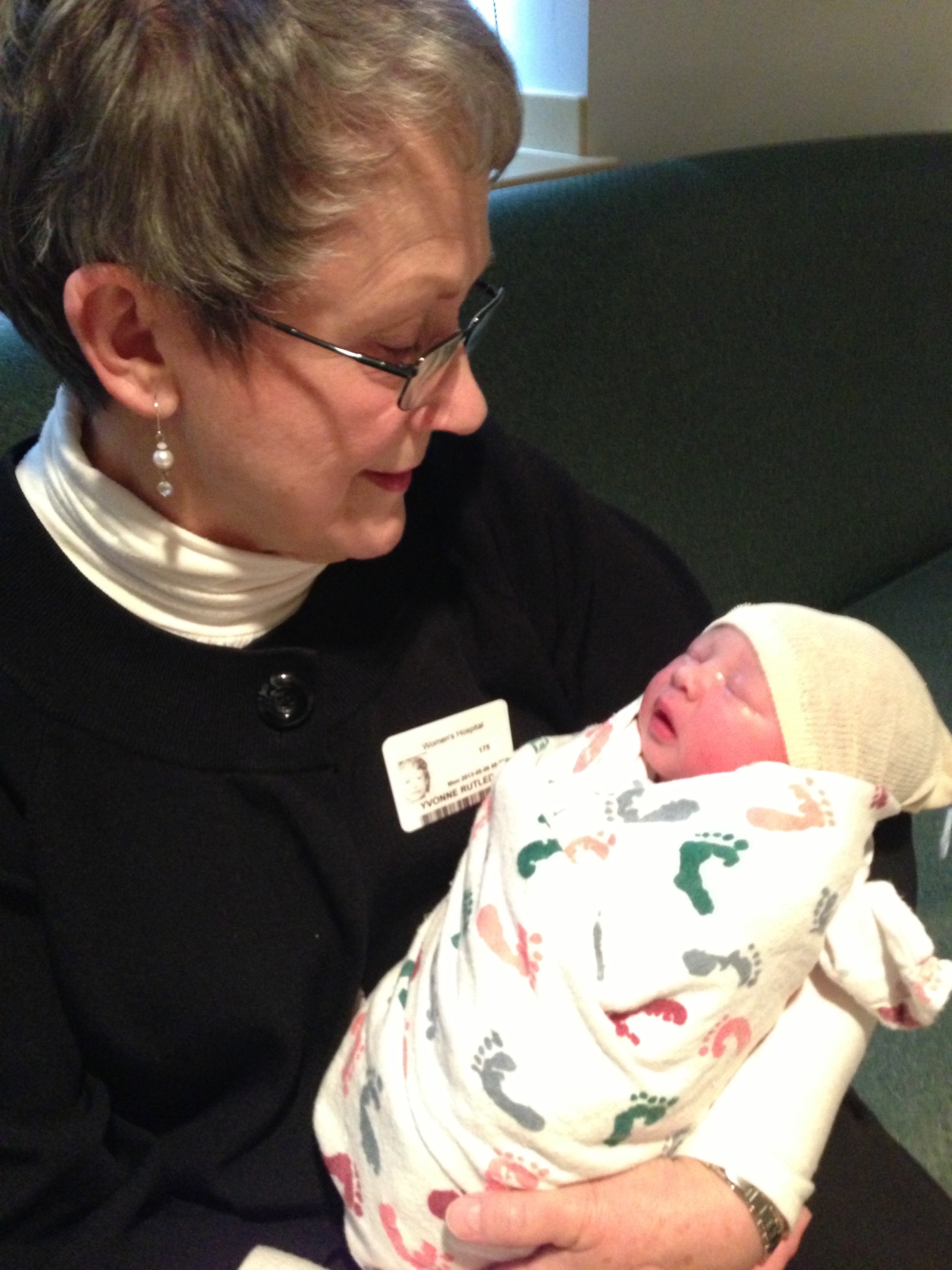 It was not until late in the evening when my pediatrician showed up dressed in “going out clothes” did I learn that I had a precipitous birth. She said she read it on the chart. I had no idea what that meant, but I looked it up as soon as she left. It is a very rapid birth marked with shaking and vomiting. Yep. That’s it. 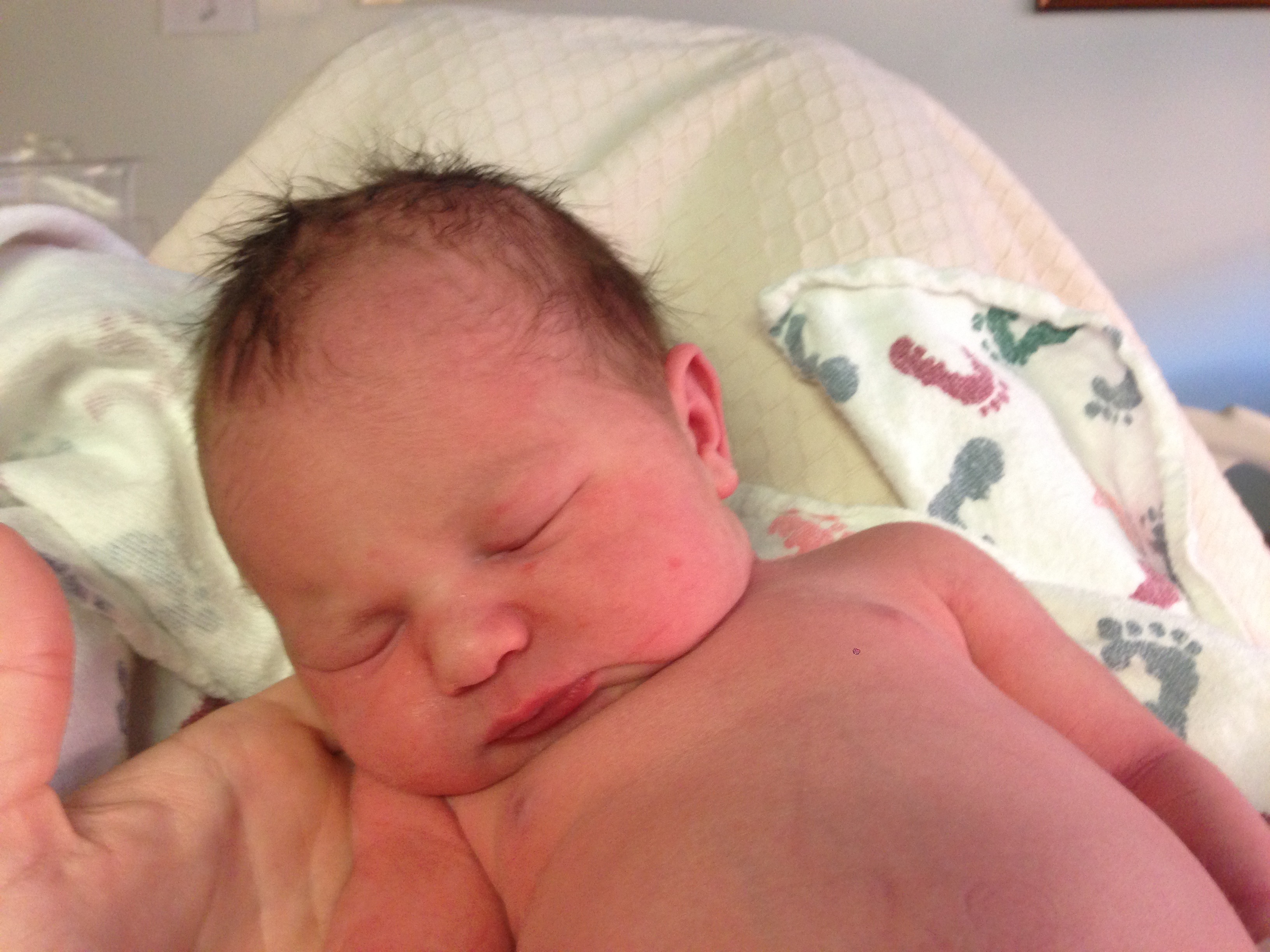 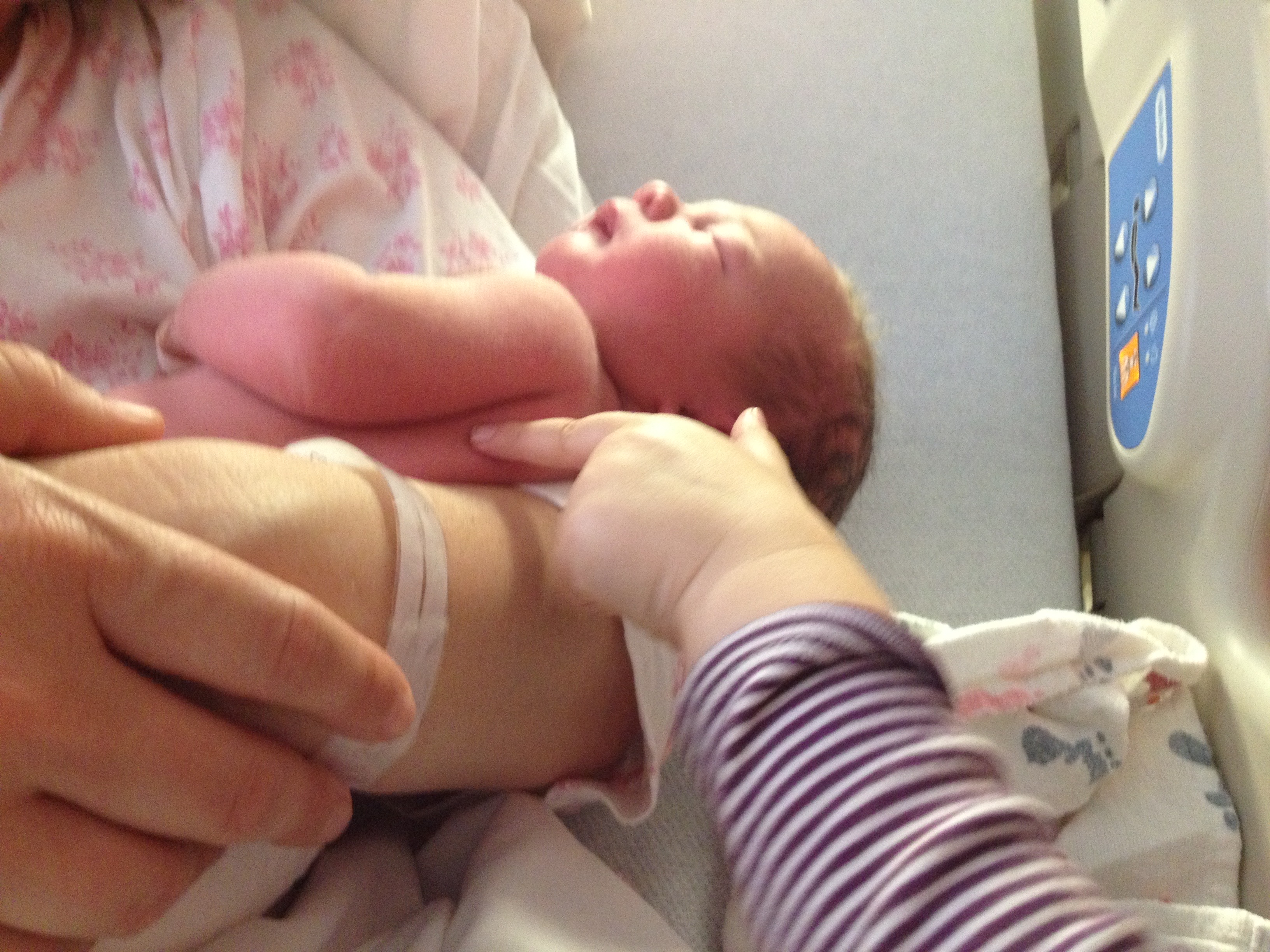 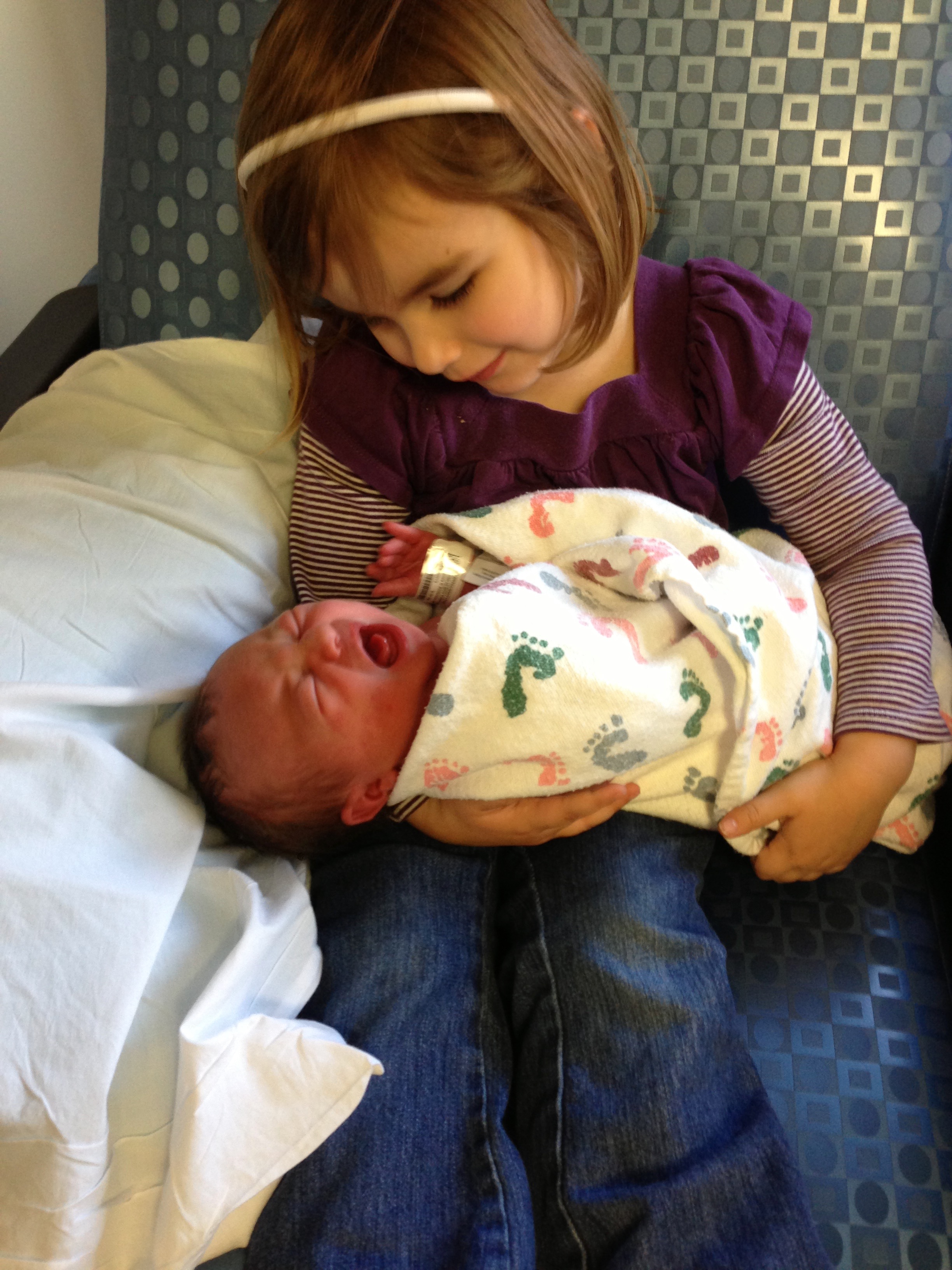 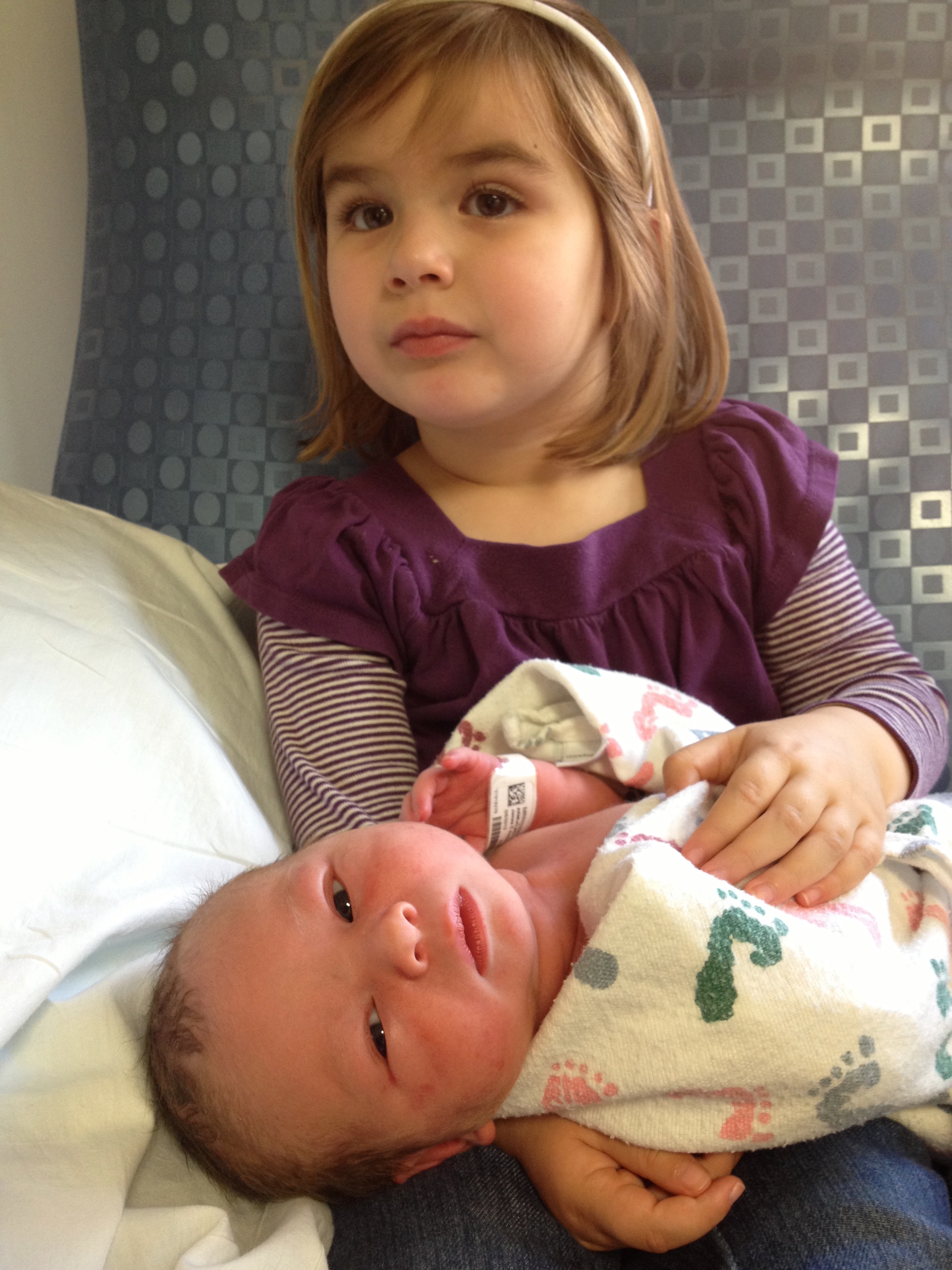 In less than two months, Lucy will be eight and Oliver will be four. Better late than never.